Can You Sue For A Collapsed Building In New York? 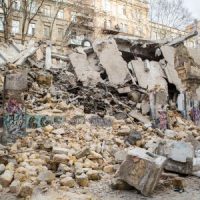 Miami’s collapsed condo has captured the attention of the entire world, but could the same thing happen in New York? This incident has certainly raised plenty of questions about the reliability of construction methods in the United States. Many people say that if it happened in Miami, it could happen in any other big city as well. Obviously, the builders, the inspectors, and many other professionals within the construction industry are being accused of gross negligence in the aftermath of the Miami condo collapse. But can you really sue for a collapsed building in New York?

Although this topic is quite complex, it becomes easier to understand with the help of a qualified, experienced personal injury attorney in New York. These legal professionals understand the ins and outs of personal injury lawsuits, including wrongful death claims filed by the survivors of a building collapse. If you have suffered injuries due to negligent construction methods of any kind, an attorney can help you plan out your next move.

You can indeed sue after your building collapses, and that is exactly what owners of the collapsed Miami condo are doing. In June of 2021, it was reported that the owners had filed a class-action lawsuit against the condo association. Among other things, the owners argued that the association failed to safeguard their “lives and property.” They are seeking more than $5 million in damages, and the final amount will be decided after consideration by a judge and jury at the time of  trial.

The key reason this lawsuit stands such a high chance of success has to do with public statements made by the condo association before the collapse. One representative of the association stated that “repair needs had been identified” prior to the disaster. This shows that the association was aware of the potential danger, and yet they did nothing to address the issues. In order to prove liability in these kinds of cases, it’s important to show that the defendant could have reasonably foreseen the dangerous situation that harmed the plaintiffs.

Filing a Lawsuit in New York

A lawsuit would function in a very similar way in New York. The only thing you would need to keep in mind is the specific requirements and regulations set forth by construction authorities in the Empire State. If these regulations are violated by the entities responsible for the building’s construction and upkeep, you stand a much better chance of success in your lawsuit. In addition, you need to consider New York’s statute of limitations, which gives you three years in which to file your claim. This time limit may be even shorter if you are suing a government agency.

If you have been injured due to some kind of flaw in a building’s construction, it makes sense to get in touch with a qualified NYC construction accident attorney as soon as possible. Reach out to Michael Gunzburg, P.C., and we’ll make sure that we explore all of your legal options in an timely and efficient manner. There is no excuse for shoddy workmanship and unsafe construction methods, especially when creating buildings that house hundreds of people. Schedule your initial free consultation,  and learn how to recover significant compensation for you and your loved ones.

By Michael Gunzburg, P.C. | Posted on September 13, 2021
« Can You Sue For Anesthetic Mistakes In New York?
Top Electrical Hazards At A New York Construction Site »