When Will New York Address Its Scooter Crisis? 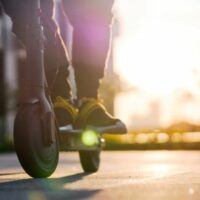 At first glance, a scooter might seem like a fun, innocent, and eco-friendly way to navigate New York’s streets. But as many people are discovering, these seemingly innocuous vehicles are causing widespread injuries across the city. Questions are being raised about how the city will actually address this issue. Scooters are now responsible for a considerable number of injuries in New York, and there have been a number of deaths over the past few years.

If you have been injured by an erratic scooter driver in New York, it’s time to get in touch with a qualified, experienced personal injury attorney. A legal professional can help you approach your personal injury claim in an effective manner, helping you get the compensation you need for things like medical expenses, missed wages, and more. With a skilled lawyer at your side, it becomes much easier to hold negligent parties accountable.

Scooter injuries are now quite common in New York City. In early June of 2021, another innocent pedestrian was struck and critically injured by a wayward scooter. The 66-year-old woman was visiting from Los Angeles when she was run over by a scooter. The woman was crossing the road at a designated crosswalk and had not disobeyed any traffic laws. To make matters even worse, the guilty scooter driver fled the scene. This hit-and-run collision isn’t the first of its kind in New York, and it certainly won’t be the last.

The woman was thrown across the crosswalk after being hit. Witnesses report that the scooter driver made no attempt to slow down before striking the pedestrian. Unbelievably, witnesses reported that no one made any attempt to help the critically injured woman, as they all opted to film her with their smartphones instead. Fortunately, this victim was eventually transported to a nearby hospital in critical condition where she received treatment.

The Challenges Associated with Filing a Personal Injury Claim

In the case of a scooter accident, there may be significant hurdles associated with a personal injury claim. In the case described above, it may be difficult for the woman to track down the guilty scooter driver, as he fled the scene of the crash. It may also be difficult to receive compensation because scooter drivers are commonly uninsured. These vehicles occupy a “grey area” between a car and a bicycle, and insurance companies don’t always extend coverage to them.

While the City doesn’t seem to be doing much about this obvious scooter crisis, you can take meaningful action. Reach out to NYC personal injury lawyer Michael Gunzburg, P.C., and you can hold negligent scooter drivers accountable for their actions. While there are a few challenges associated with filing personal injury claims against scooter drivers, you stand a strong chance of success when you team up with a skilled legal professional. Reach out today, and we can help you get the compensation you need for medical expenses, missed wages, and more.